The market did make a new low as expected by the main count, but not by much. Price moved only about 150 pips lower, coming nearly 30 pips short of reaching our first target.

A bullish hammer candlestick formed on the daily chart as the week ended, accompanied by a subtle bullish shift in momentum. This led me to consider the possibility of a bullish reversal as my main count, but it’s not enough on its own to discard the possibility of a small bearish continuation, which is what the alternate count covers.

You’ll notice that I made a slight modification to the wave degrees. I think the new labeling is slightly better from a technical perspective, specially given the recent developments. And since it coincides almost perfectly with the targets and general expectations of the previous labeling, which means there shouldn’t be any confusion, I felt I might as well keep you up-to-date on my latest views.

The bigger picture sees that the euro is moving generally toward the upside in maroon wave B, which is forming an expanded flat labeled black waves A, B and C.

Blue wave 3 formed an impulse labeled pink waves i through v, and reached well over 261.8% the length of blue wave 1.

The following daily charts zoom into the details of blue wave 4. 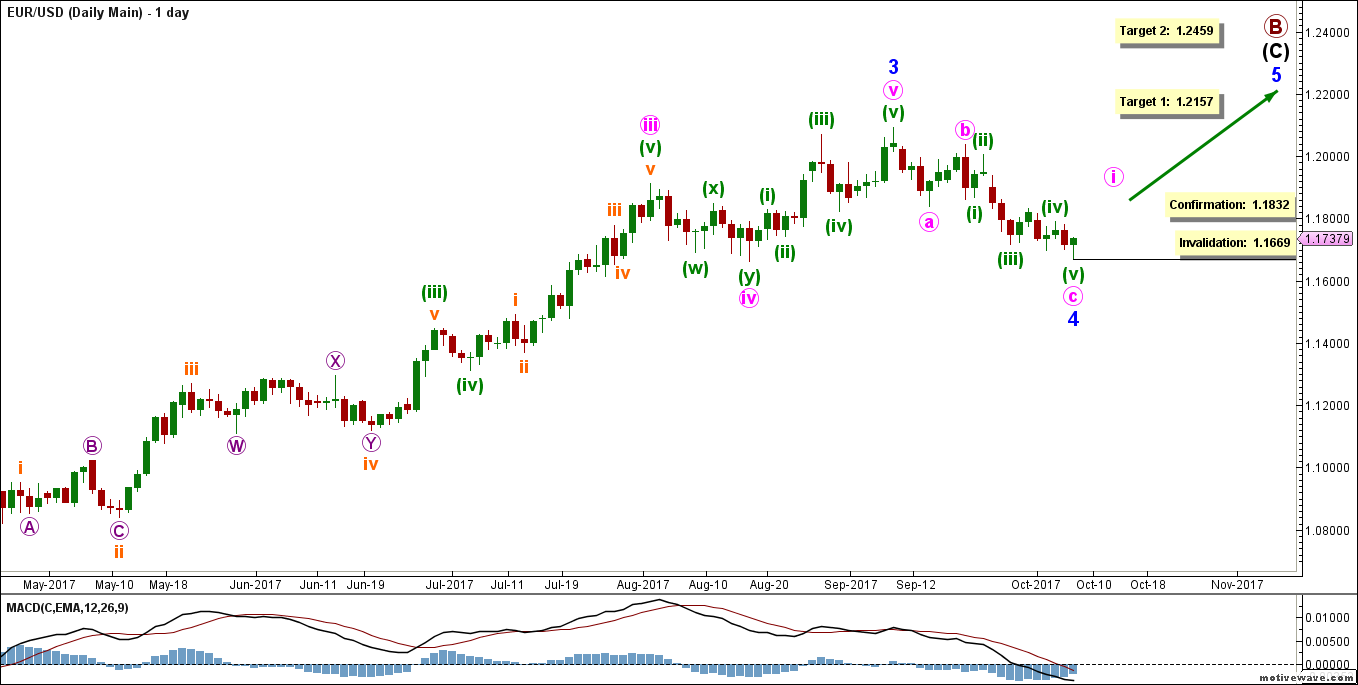 The main daily count sees that blue wave 4 completed a zigzag labeled pink waves a, b and c.

Pink wave b retraced exactly 78.6% of pink wave a.

Green wave (iii) reached exactly 161.8% the length of green wave (i), and green wave (v) reached almost exactly 61.8% of its length. These very typical wave relationships are the reason I consider this count to be a better fit than the alternate.

Now blue wave 5 is forming either an impulse or an ending diagonal labeled pink waves i through v.

This count expects the euro to be moving toward the upside in blue wave 5. This will be largely confirmed by movement above 1.1832.

This wave count is invalidated by movement below 1.1669 as pink wave ii may not move beyond the start of pink wave i.

This alternate daily count sees that blue wave 4 is still unfolding a zigzag labeled pink waves a, b and c.

This count differs from the main count in that it sees that pink wave c is forming an ending diagonal labeled green waves (i) through (v).

Green waves (i), (ii) and (iii) each formed a zigzag labeled orange waves a, b and c.

Green wave (iv) will probably take a day or two to complete. It should find resistance around 1.1770, and ideally it will remain below 1.1785.

This count expects the euro soon to continue moving toward the downside in green wave (v) to complete pink wave c. This will be confirmed by movement below 1.1669.

This wave count is invalidated by movement above 1.1832 as green wave (iv) may not move beyond the start of green wave (iii).