The market moved below 1.1837, thereby invalidating the main triangle count and confirming the alternate count. Price so far has reached 1.1717, exceeding our first target 72 pips, which gives us two possibilities.

The new main count sees that there’s still room on the downside for another small decline to complete this correction. On the other hand, the alternate count makes the case that the correction is already complete, and examines the possible targets of the new rally. 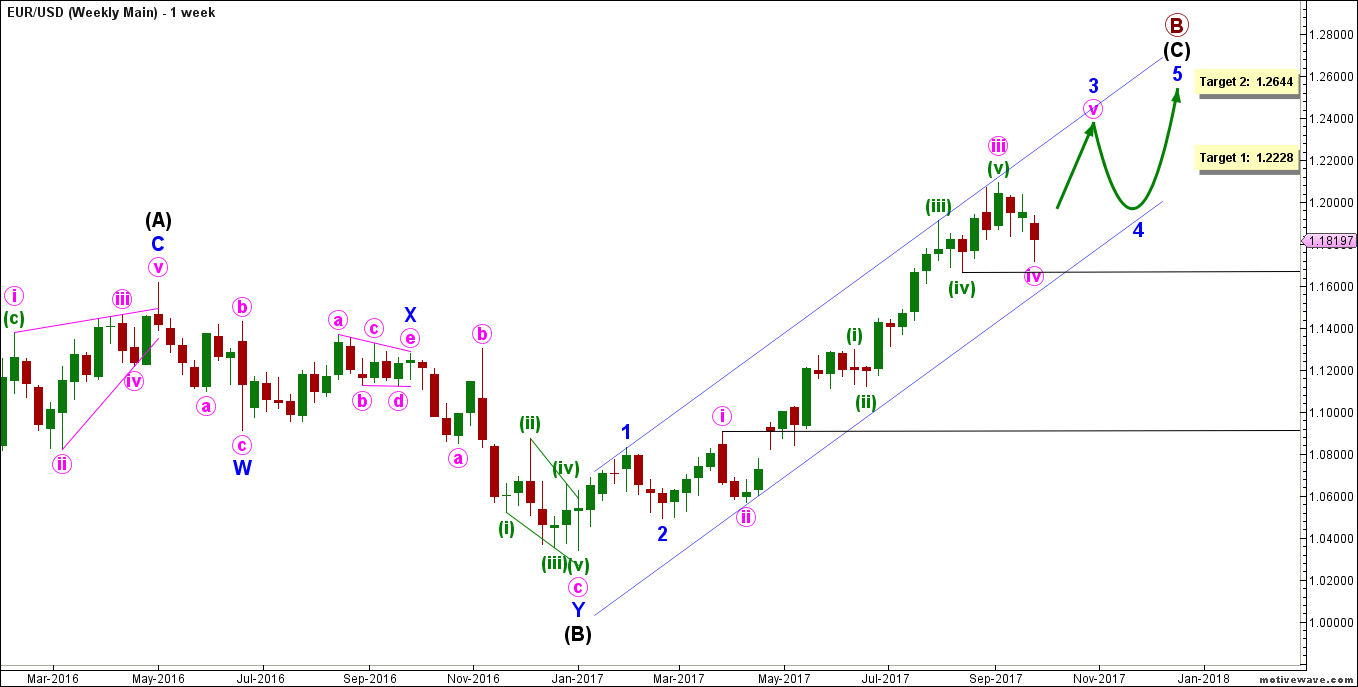 The bigger picture sees that the euro is moving toward the upside in maroon wave B, which is forming an expanded flat labeled black waves A, B and C.

The main daily count sees that pink wave iv is forming a flat labeled green waves (a), (b) and (c).

Green wave (b) formed a running flat labeled orange waves a, b and c.

Green wave (c) is forming an impulse labeled orange waves i through v.

This count expects the euro to be moving toward the downside in green wave (c) to complete pink wave iv. This will be confirmed by movement below 1.1717.

This alternate daily count sees that pink wave iv formed a flat labeled green waves (a), (b) and (c).

Green wave (b) formed a contracting triangle labeled orange waves a through e.

This count expects the euro to be moving toward the upside in pink wave v. This will be confirmed by movement above 1.1861.

This wave count is invalidated by movement below 1.1717.

The pound moved generally sideways with a very slight upward tilt. So far this is consistent with both hourly counts, but it gives the main count a thin edge. In fact, the alternate hourly count is now redundant. If the main hourly count is invalidated before its targets are reached, the main daily count already gives us the necessary alternate targets. Read More
As expected the euro moved generally but timidly upward, reached both of our targets, and exceeded the second target by 6 pips so far. I think there's room for another very small advance, but it's probably safe to say that this low-degree correction is very near completion. Read More
The pound moved toward the upside as expected and reached both of our confirmation points, so our previous count is technically still valid. However, since the market retraced about 90% of that advance, we now have an alternate count that has slightly better technical properties. So today I'm presenting both counts, with tight confirmation and invalidation points, so that we can let the market tell us which is the correct one. Read More
In light of the developments that have been taking place in the EUR/USD market over the past couple of days, I felt it was necessary to re-examine the market from the top down. I'm glad to say that I still think we're very much on the right track. And with that said, I'd also like to share with you my latest thoughts on what we can safely expect over the coming period. Read More
Instead of moving upward as expected, the pound a slight 20-pip low, giving the entire day a generally sideways look. This decline looks very timid and corrective, leading more credence to my view that it's a terminal move. I delayed the publishing of this analysis as much as I could, hoping the market would give us price confirmation of this assumption, but so far it's been a very stale market. Other than a small modification to the hourly count, the general outlook remains exactly the same as yesterday. Read More
I was hoping the market would move up to reach our confirmation point during the day, but instead it continued downward and made a new 40-pip low. Again, this doesn't really change my general outlook of the market. I still see the move since August 28th to be part of a fourth-wave correction, which should be very near completion. But since the past few days have been rather consistently bearish, it's probably a good strategy for us to remain cautiously bearish as well, until we see some reasonable sign of reversal. To cover our bases, I'm publishing the daily chart as if the fourth wave is already complete so that we can have usable targets for the fifth wave up. On the other hand, the hourly chart tracks the development of the fourth wave as it's actually unfolding, with the understanding that once price breaks its invalidation point the targets of the daily chart come into play. Read More
As expected the pound moved toward the downside and reached both of our targets. What was not expected, however, is that price exceeded the second target by 44 pips. The nature and extent of this most recent decline don't have an effect on the larger picture, but suggest a modification to the hourly count. It now seems that the wedge-shaped move which started from 1.3659 is actually better labeled as an ending diagonal. For this count to be confirmed, I'd very much like to see a moderate rally some time during the day -- particularly one the reaches and exceeds the confirmation points presented in today's analysis. Read More
As expected the euro moved toward the downside, passed our first target, and reached the second target precisely to the pip. It then sprang up for 50 pips, and I strongly suspect it's going to continue up from there. Obviously I'd still like to see price's reaching the confirmation point before I have full confidence that the uptrend has resumed. But as far as early indicators go, both the wave pattern and the momentum reading strongly suggests that this is the case. Read More
The pound continues to swing and bounce in very overlapping and complex patterns. So far it has invalidated the main hourly count, but the subdivisions don't exactly support the alternate count, either. The only clear insight to be gleaned from this chaos is that the market is definitely undergoing a very complex correction. There are several ways to label this movement, and each labeling carries slightly different consequences for the immediate short term. I think it would be too confusing to focus too much on every single possible turn of the market at this point. So in order to keep a level head and a clear vision, I'm proposing one primary count on the hourly chart that shows the most important price levels, while keeping the daily chart completely focused on the aftermath of this correction. Read More
Get 7 days FREE TRIAL