As expected the market moved towards the downside, reached both of our targets, and exceeded the second target by 47 pips.

In the process, the market made a new low beyond the previous structure low. This wave structure can go both ways, so it’s too early to tell whether this is a signal for downtrend continuation or just a small fake-out before a larger corrective rally.

I delayed publishing the analysis until the IFO and CPI numbers were publicized, in the hopes that I can present you with a more concrete count. The numbers look good for the Euro so far, which suggests that our previous analysis is still on the right track.

The market tested the 1.0500 level, and we’ll need to see whether it will hold above that level during the day before we can be sure of the larger trend and direction.

Elliott Wave chart analysis for the EURUSD for 21st February, 2017. Please click on the charts below to enlarge.

Within it, blue wave 1 formed a leading diagonal labeled pink waves i through v.

Blue wave 2 formed a zigzag labeled pink waves a, b and c, retracing 50% of blue wave 1.

This count expects the euro to be moving towards the downside in blue wave 3. This will be confirmed by movement below 1.0340.

This wave count is invalidated by movement above 1.0829 as pink wave ii may not move beyond the start of pink wave i. 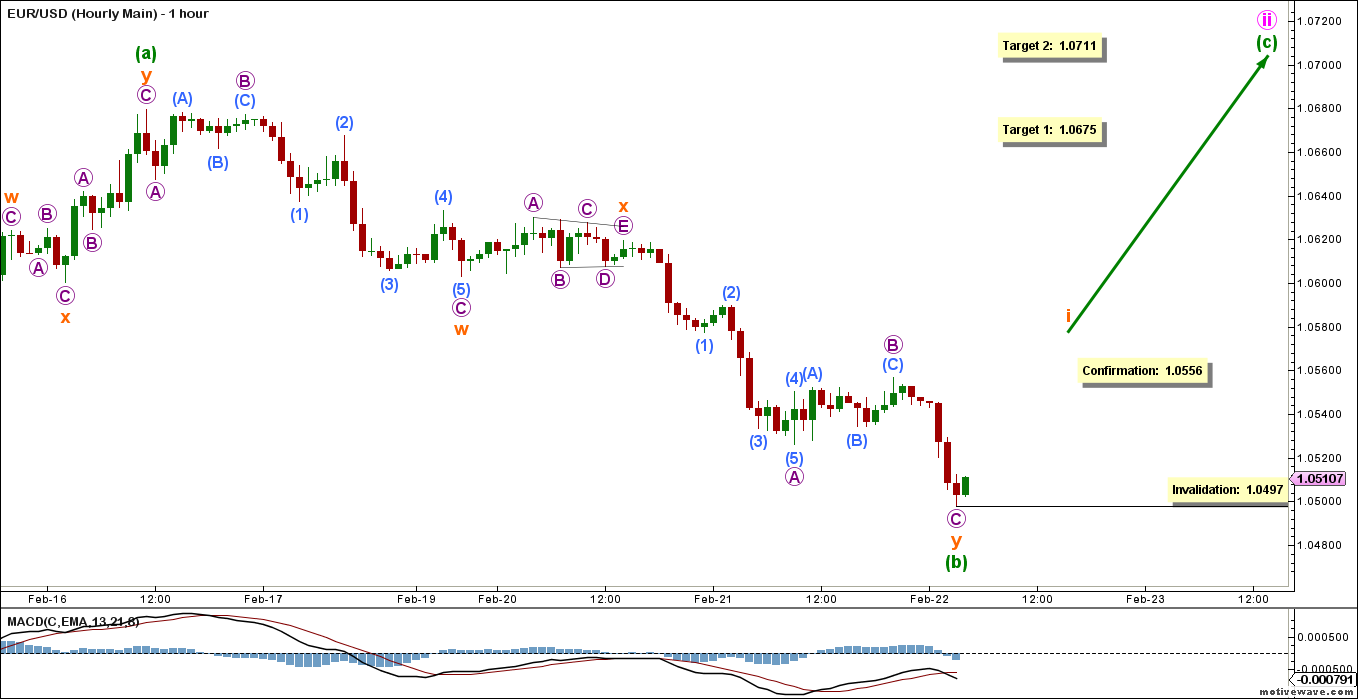 This main hourly count sees that pink wave ii is likely forming an expanded flat labeled green waves (a), (b) and (c).

Green waves (a) and (b) each formed a double zigzag labeled orange waves w, x and y.

It’s impossible to know for sure whether it’s completed at this point, but this is a significant level that should ideally be respected by the market for the larger pattern to hold.

This count expects the euro to move towards the upside in green wave (c) to complete pink wave ii. This will be largely confirmed by movement above 1.0556.

Green wave (c) must form either an impulse or an ending diagonal labeled orange waves i through v.

Once price moves above our confirmation point, this wave count is invalidated by movement below 1.0497 as orange wave ii may not move beyond the start of orange wave i.