As expected the euro moved towards the downside, passing our confirmation point by 20 pips.

This provides strong confirmation that a new medium-term downtrend has begun, and should continue for another week or so. However, there’s still another possibility (although much less likely) that the market is wandering about within an extended flat correction.

We’re studying both possibilities in today’s analysis. But at any rate, both counts expect a similar direction, at least for today.

Elliott Wave chart analysis for the EURUSD for 27th May, 2016. Please click on the charts below to enlarge. 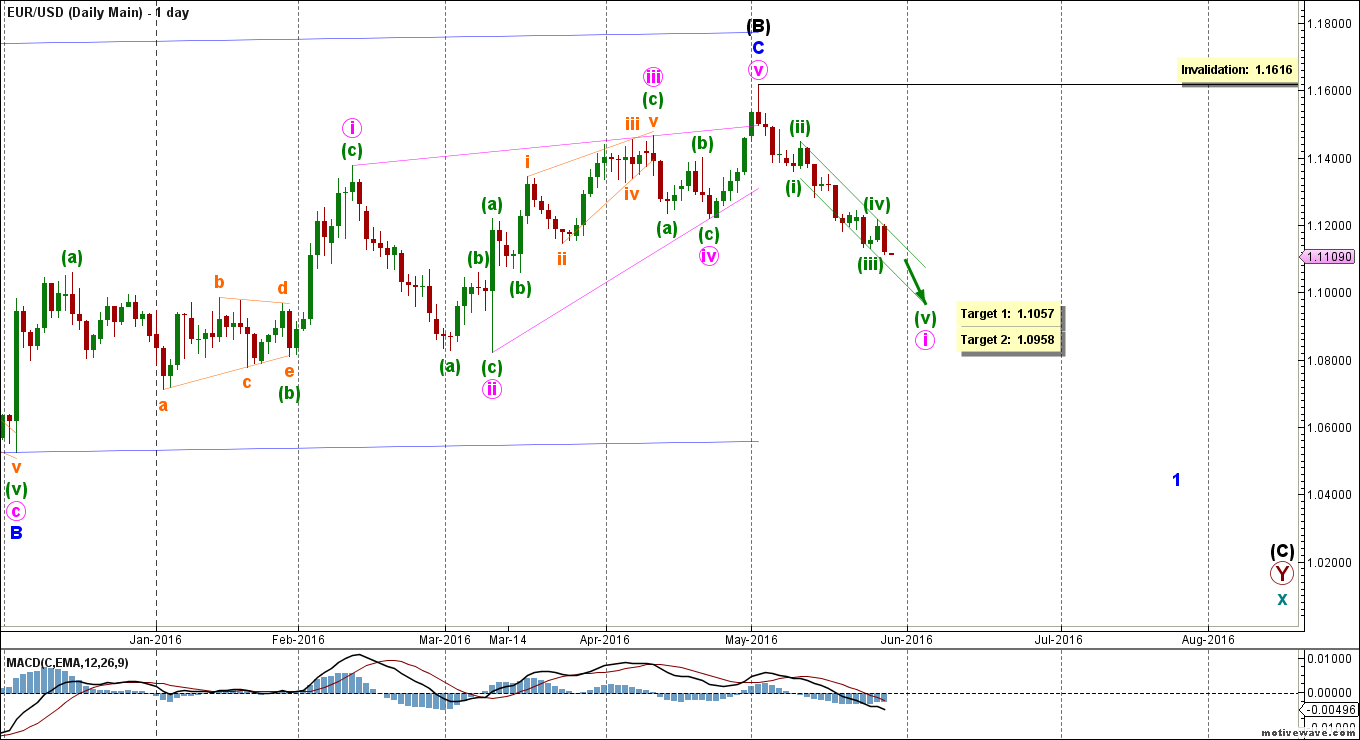 The bigger picture sees that the euro was moving sideways in black wave (B), which formed a running flat labeled blue waves A, B and C.

Blue wave B retraced exactly 95% of blue wave A, fulfilling the requirement of a flat correction.

Blue wave C formed an ending diagonal labeled pink waves i through v, each forming a zigzag labeled green waves (a), (b) and (c).

This count expects the euro to be moving towards the downside in black wave (C), to complete maroon wave Y, and therefore teal wave x. This will be confirmed by movement below 1.0821.

Within it, blue wave 1 is likely forming an impulse labeled pink waves i through v.

This wave count is invalidated by movement above 1.1616 as pink wave ii may not move beyond the start of pink wave i. 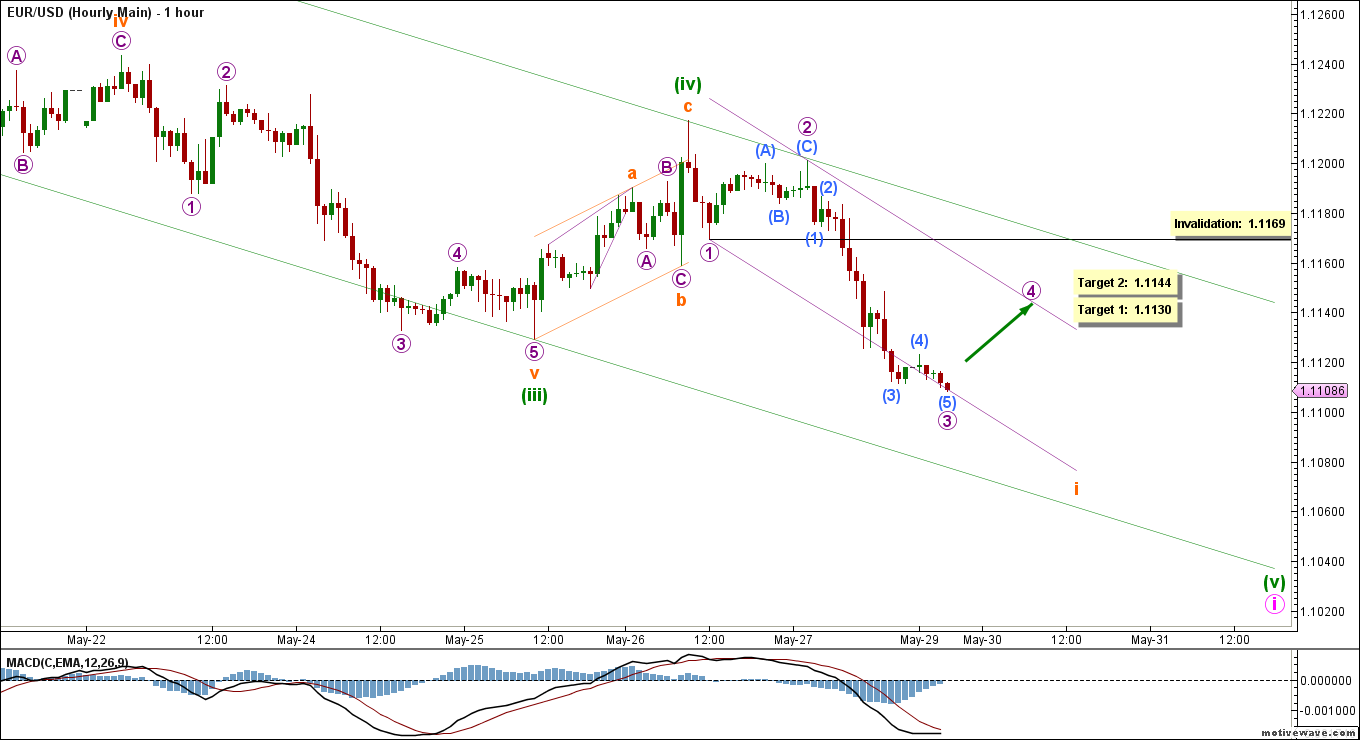 This main count sees that pink wave i is forming an impulse labeled green waves (i) through (v).

Within it, green wave (iii) formed an impulse labeled orange waves i through v, reaching reasonably over 100% the length of green wave (i).

Green wave (iv) formed a zigzag labeled orange waves a, b and c, retracing a little over 23.6% of green wave (iii).

Green wave (v) is forming an impulse labeled orange waves i through v.

Within it, orange wave i is forming an impulse labeled violet waves 1 through 4.

This count expects the euro to move towards the upside in violet wave 4. This will be initially confirmed by movement above 1.1123.

This wave count is invalidated by movement above 1.1169 as violet wave 4 of this impulse may not enter the price territory of violet wave 1. 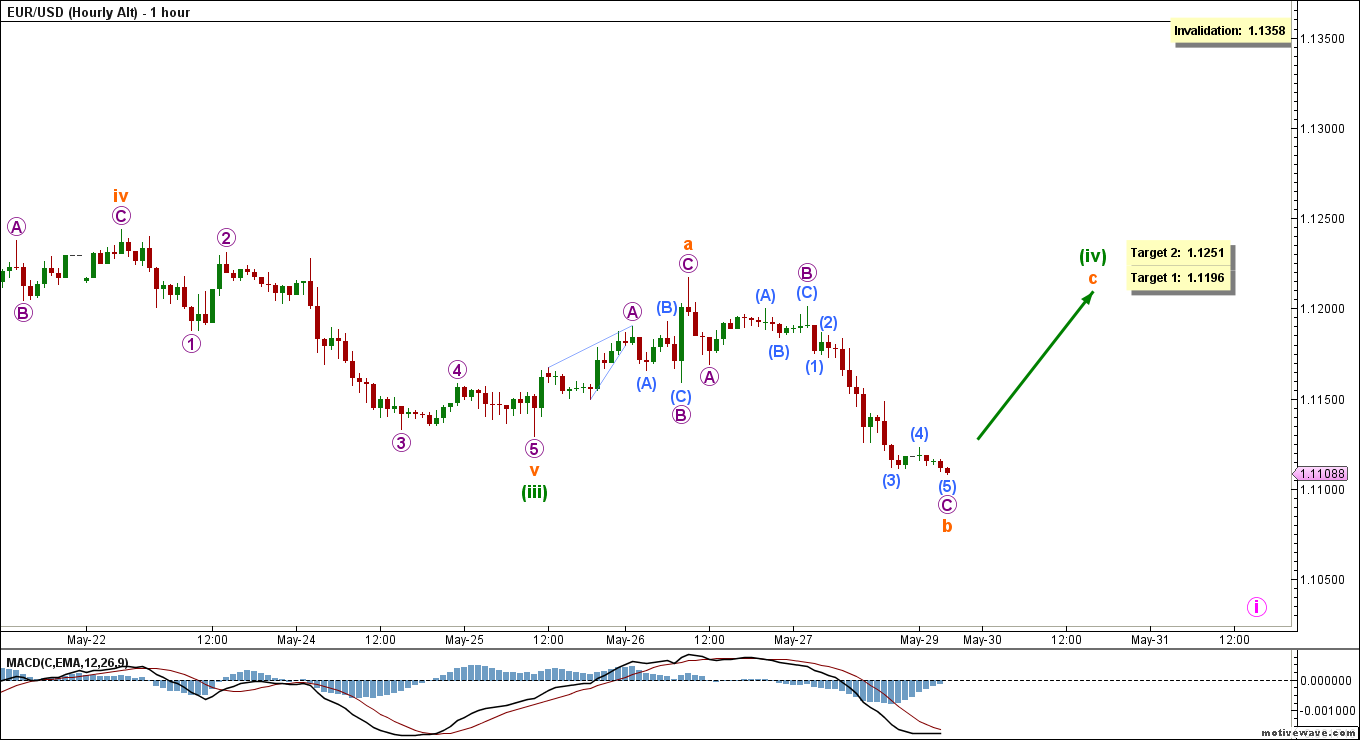 This alternate count sees that green wave (iv) is still unfolding as an expanded flat labeled orange waves a, b and c.

Within it, orange wave a formed a zigzag labeled violet waves A, B and C.

Orange wave b formed a zigzag labeled violet waves A, B and C, retracing 123.6% the length of orange wave a.

This wave count is invalidated by movement above 1.1358 as green wave (iv) may not enter the price territory of green wave (i).