Today the euro lost another 37 pips of its value against the U.S. dollar — which was not what we expected.

However, the euro immediately regained most of its losses. In addition, momentum indicators are still showing a divergence. These two reasons, along with the larger pattern, suggest that price should see a period of sideways-to-upwards consolidation over the near-term.

Elliott Wave chart analysis for the EURUSD for 30th July 2014. Please click on the charts below to enlarge. 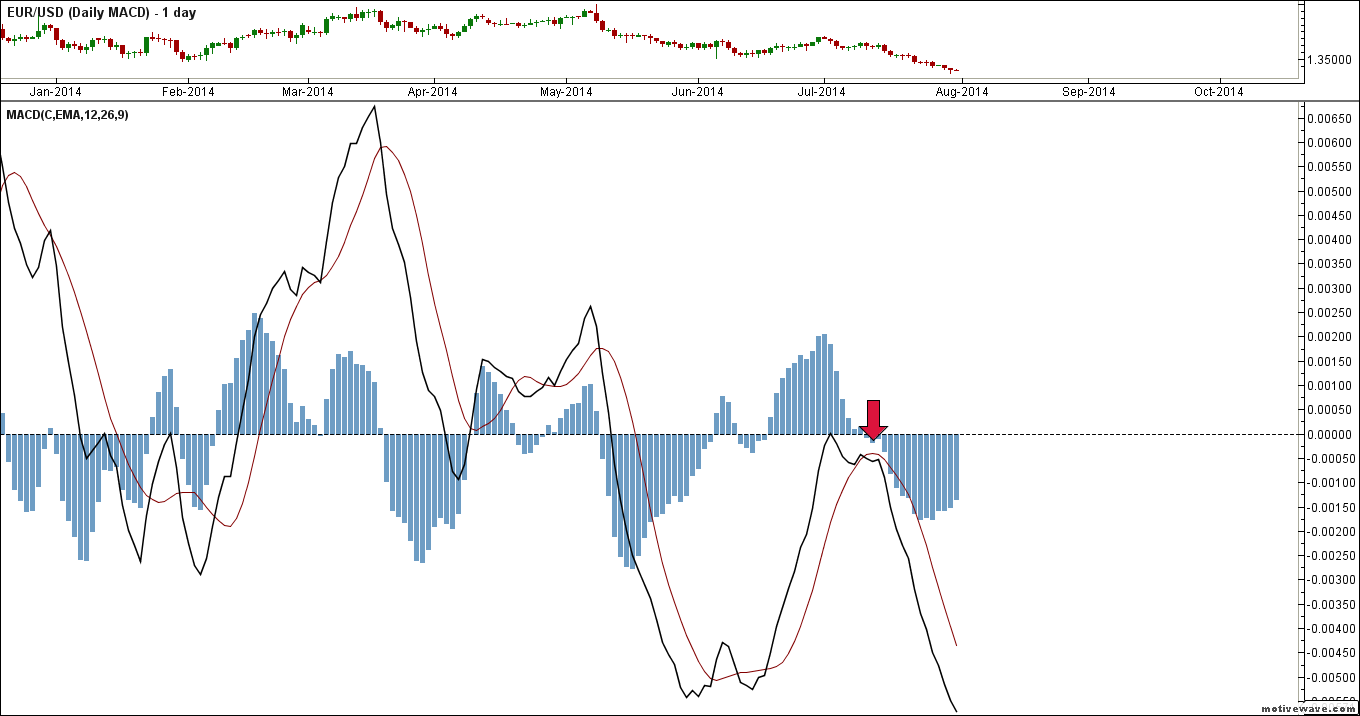 Primary wave E is unfolding towards the downside most likely as a zigzag labeled intermediate waves (A), (B) and (C).

Intermediate wave (A) is probably forming an impulse labeled minor waves 1 through 5.

Minor wave 2 formed a flat labeled minute waves a, b and c, which retraced just over 38.2% of minor wave 1, and is now complete.

This count expects the euro to be continuing its downwards movement in minor wave 3, which must unfold as an impulse labeled minute waves i through v.

The MACD indicator supports this count by showing a bearish crossover, as well as bearish momentum with both the fast and slow lines being below the zero-line.

In terms of candlestick analysis, no clear pattern appears at this point, but downwards bars appear to be strongly impulsive.

This wave count is invalidated by movement above 1.3701 as this is the assumed start of minor wave 3. 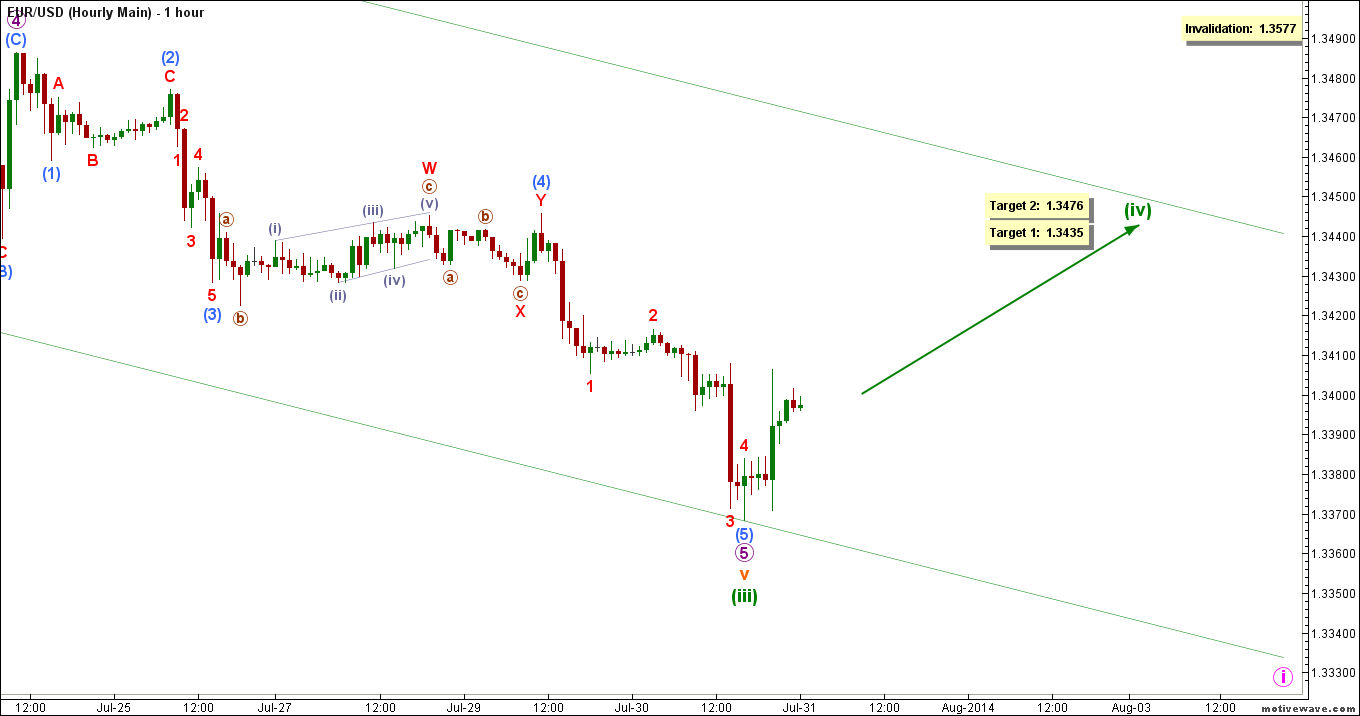 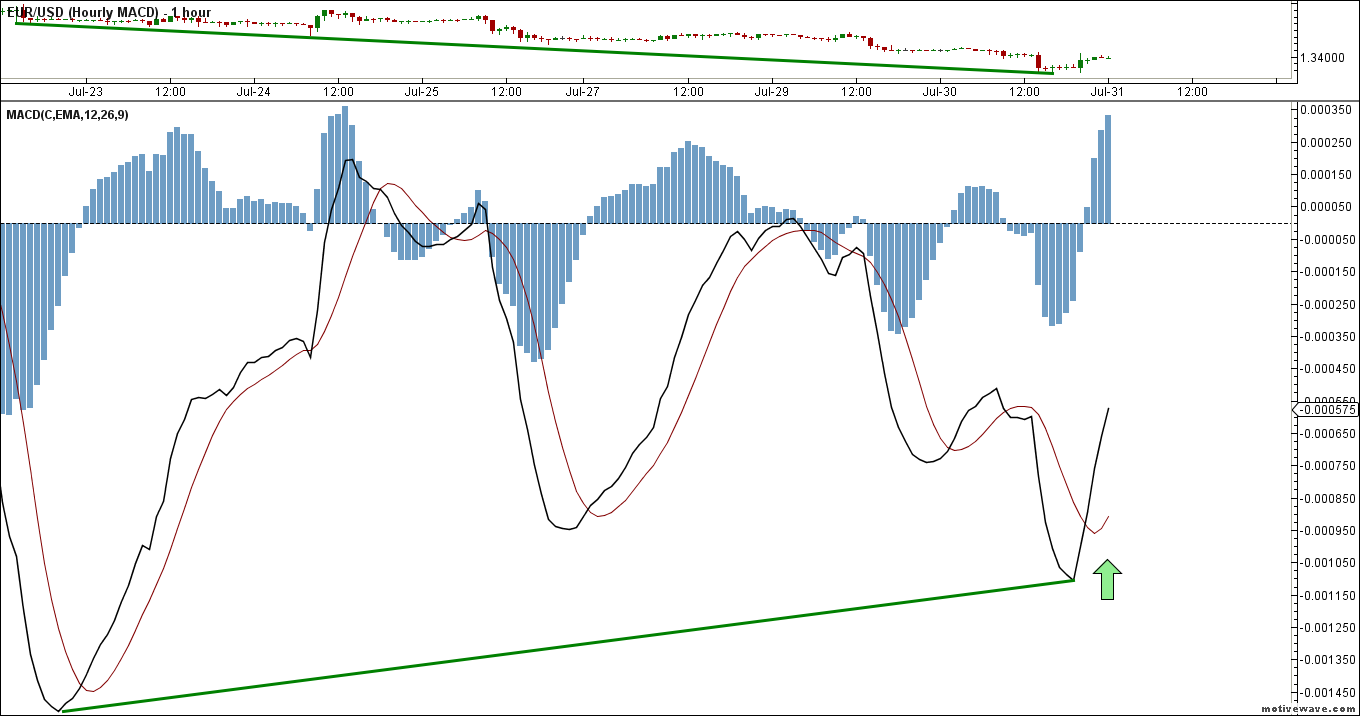 This count sees that minute wave i is unfolding towards the downside as an impulse labeled minuette waves (i) through (v).

Minuette wave (iii) unfolded as an impulse labeled subminuette waves i through v.

Within it, subminuette wave v formed an impulse labeled micro waves 1 through 5.

Within it, submicro wave (2) formed a zigzag labeled miniscule waves A, B and C.

This count expects the euro to move sideways to upwards in minuette wave (iv).

The MACD indicator supports this count by showing a very clear bullish divergences, as well as a bullish crossover.