Today the euro repeated exactly what it had been doing for the past week. Despite the increasingly improving technical picture, it made another low which exceeded the previous low by about 27 pips.

The added complexity of the developing pattern convinced us that it was time to revisit the bigger picture, which is why we’re presenting today’s analysis on the 2-hour chart for better clarity. However, our near-term, correctively-bullish expectation is still the same. We simply see it as a matter of “when”, not “if.”

Elliott Wave chart analysis for the EURUSD for 28th May 2014. Please click on the charts below to enlarge. 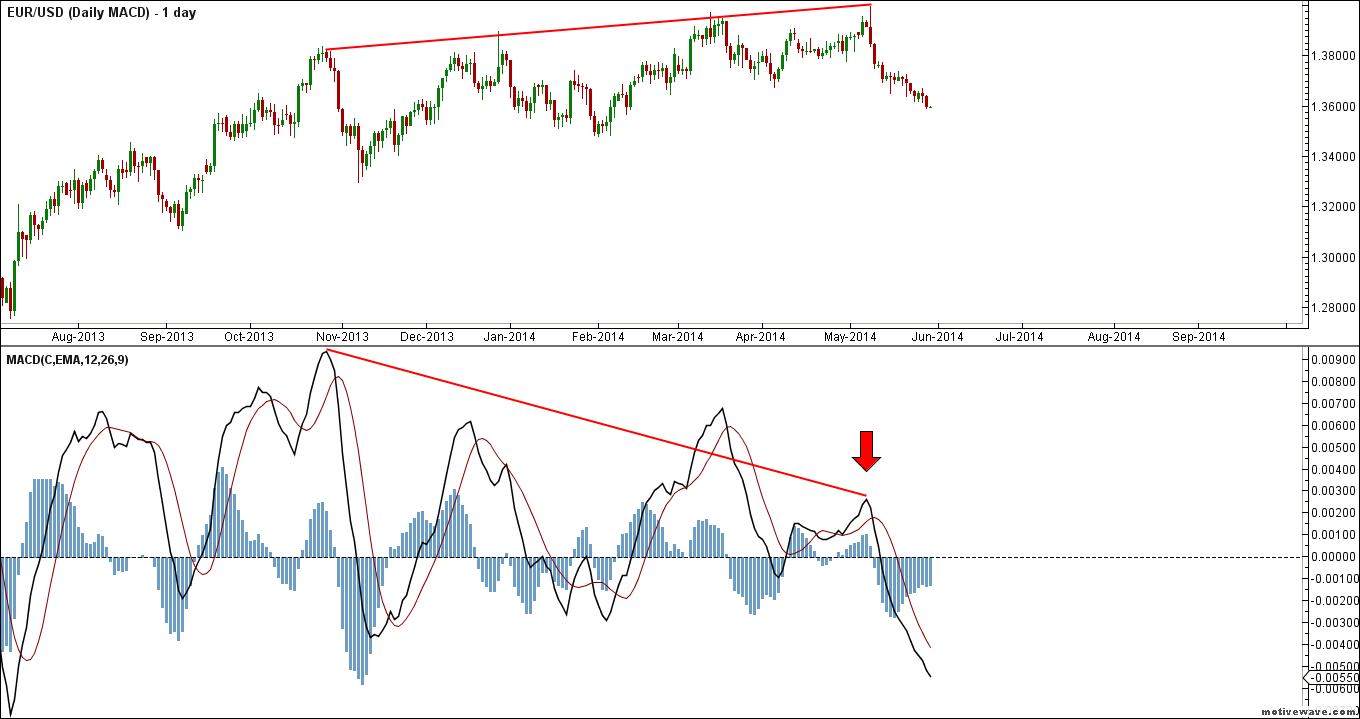 Primary wave D unfolded as a double zigzag labeled intermediate waves (W), (X) and (Y), each subdividing into a zigzag labeled minor waves A, B and C.

Within intermediate wave (Y), minor wave C formed an ending diagonal labeled minute waves i through v, reaching just above 61.8% the length of minor wave A.

This count expects that the euro is now moving towards the downside in minor wave 1, within intermediate wave (A), within primary wave E, to complete cycle wave x. This will be initially confirmed by movement below 1.3295.

The MACD indicator supports this count by showing a bearish crossover, as well as a series of clear bearish divergences.

In terms of candlestick analysis, the enormous Bearish Engulfing Pattern at the end of primary wave D strongly supports this count as well. 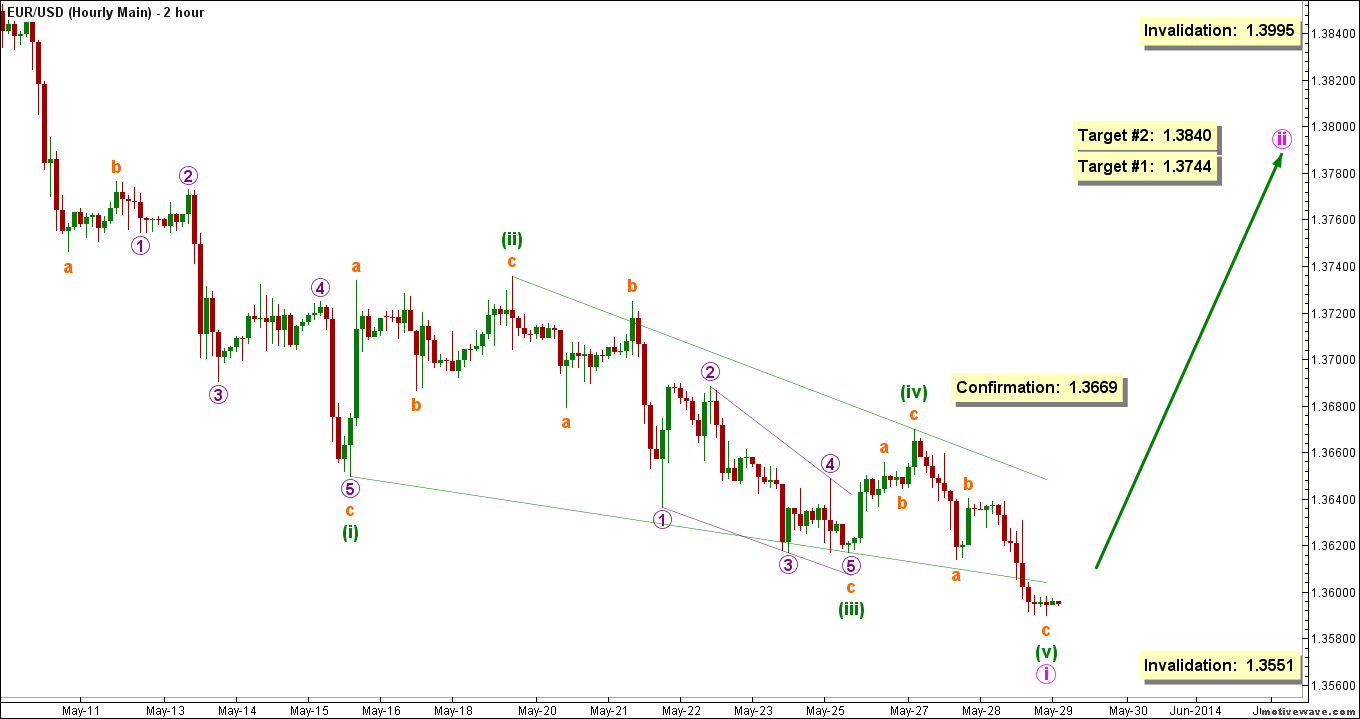 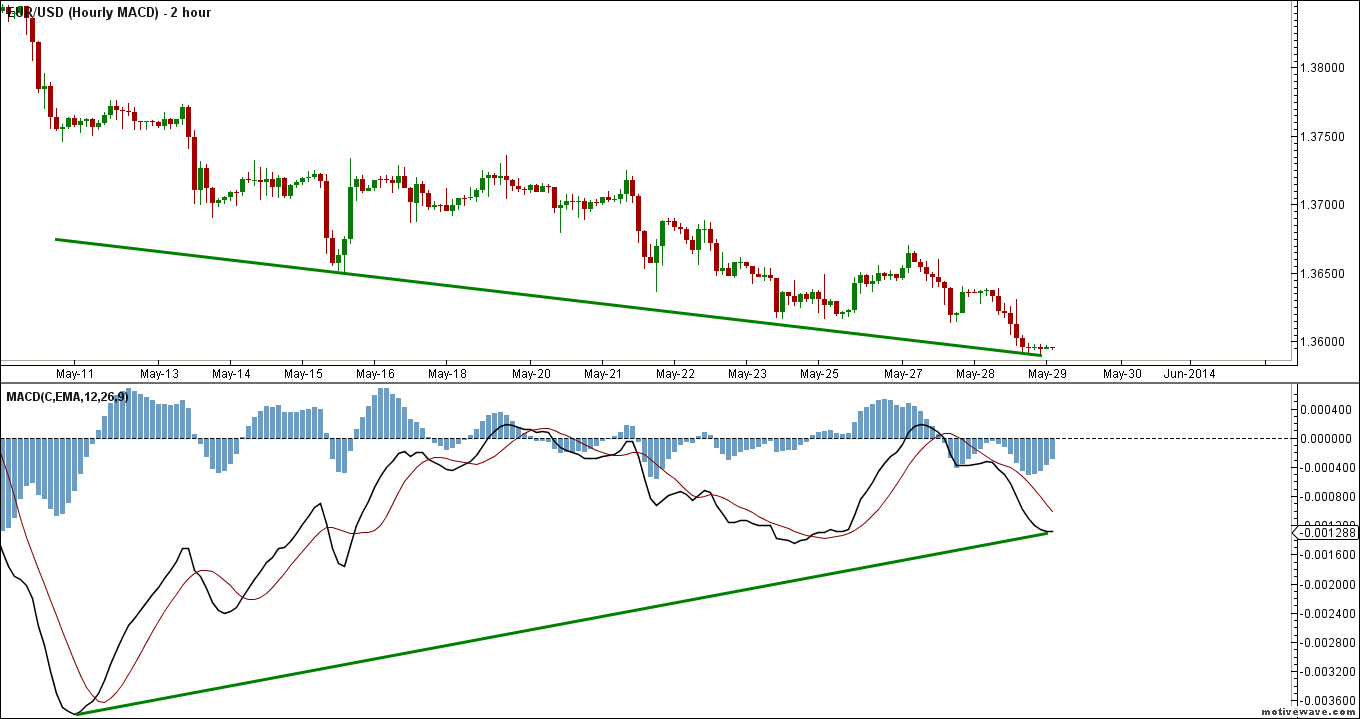 This count sees that the euro is moving towards the downside in minor wave 1, which is most likely unfolding as an impulse labeled minute waves i through v.

We now see that minute wave i is most likely unfolding as a leading diagonal labeled minuette waves (i) through (iv), each subdividing into a zigzag labeled subminuette waves a, b and c.

Minuette waves (i) through (iv) are most likely complete.

Subminuette wave c may be complete, as it has already exceeded 61.8% the length of subminuette wave a and is very close to reaching 100% of its length. It may still continue falling for a short while, possibly to around 1.3583 or 1.3568.

This count expects the euro soon to finish minute wave i and start moving towards the upside in minute wave ii. This will be initially confirmed by movement above 1.3669.

The MACD indicator supports this count by showing a series of clear bullish divergences, indicating that momentum has been steadily favoring the euro for the past 2 weeks, despite the current fall in price.