Still no sign of the euro’s making up its mind. Price is trading in tighter and tighter ranges, and the movement is becoming increasingly complex and overlapping. Patience is definitely a virtue in times like these.

Market history tells us that the longer and more complicated a correction gets, the sharper and more powerful the subsequent trend usually is. So while we still don’t have enough indications to enter the market one way or the other, be prepared to ride a strong wave once we confirm its direction!

Elliott Wave chart analysis for the EURUSD for 25th February 2014. Please click on the charts below to enlarge. 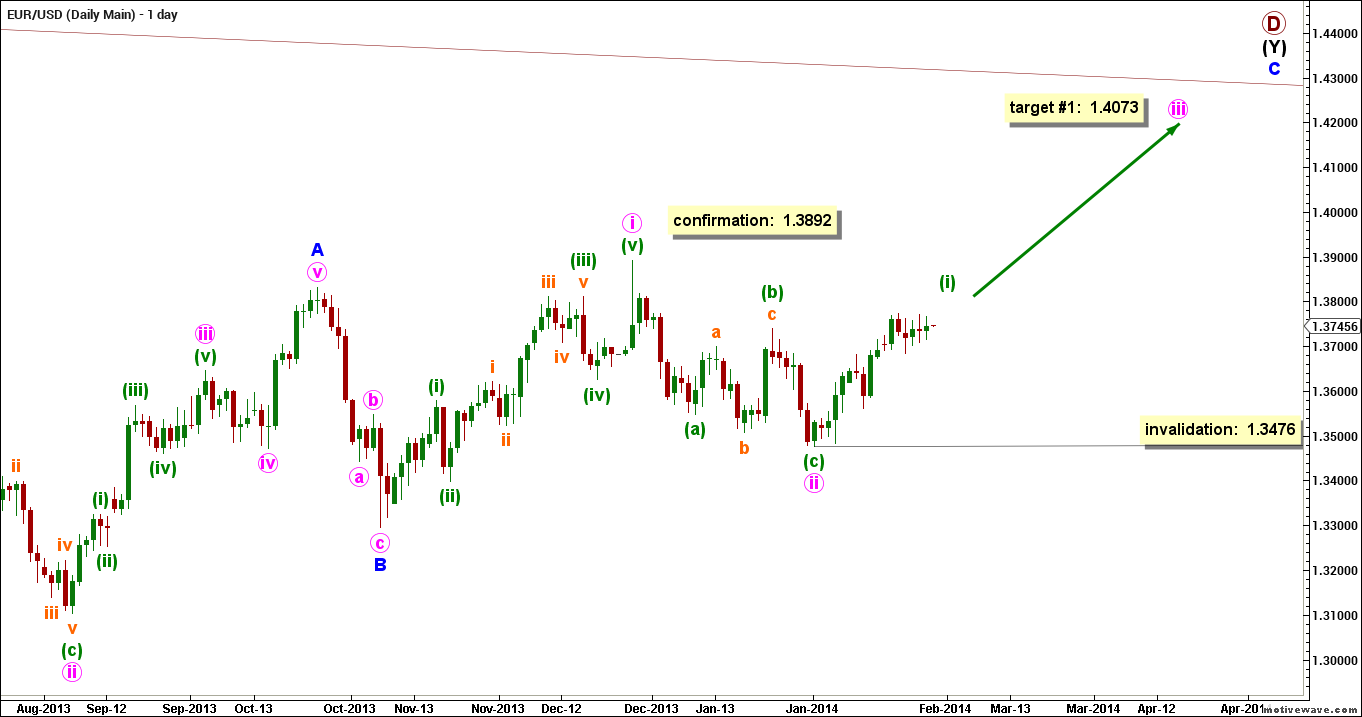 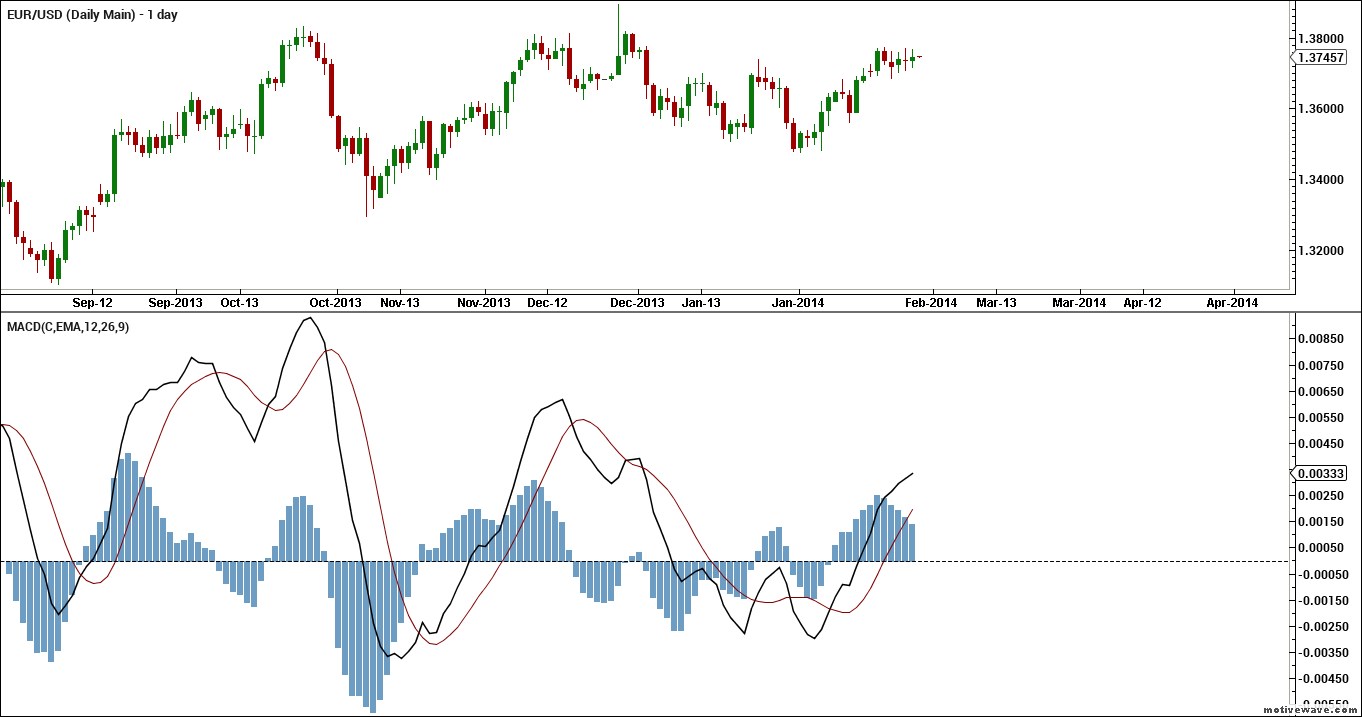 Intermediate mediate is unfolding as a zigzag labeled minor waves A, B and C.

Minor wave B formed a zigzag labeled minute waves a, b and c.

Minute wave iii is unfolding as an impulse, and within it minuette wave (i) is now unfolding towards the upside.

This count expects the euro to continue moving towards the upside in minute wave iii. This will be confirmed by movement above 1.3892.

The MACD indicator supports this count by showing a bullish crossover and increasing upwards momentum. Both slow and fast lines are now above the zero line, which is another bullish signal.

In terms of candlestick analysis, no clear pattern appears at this point, but the entire recent movement seems rather bullish, with only the most recent bars showing indecision in the form of “spinning top” and “doji” formations.

This wave count is invalidated by movement below 1.3476 as within minute wave iii no second wave may move beyond the start of the first wave. 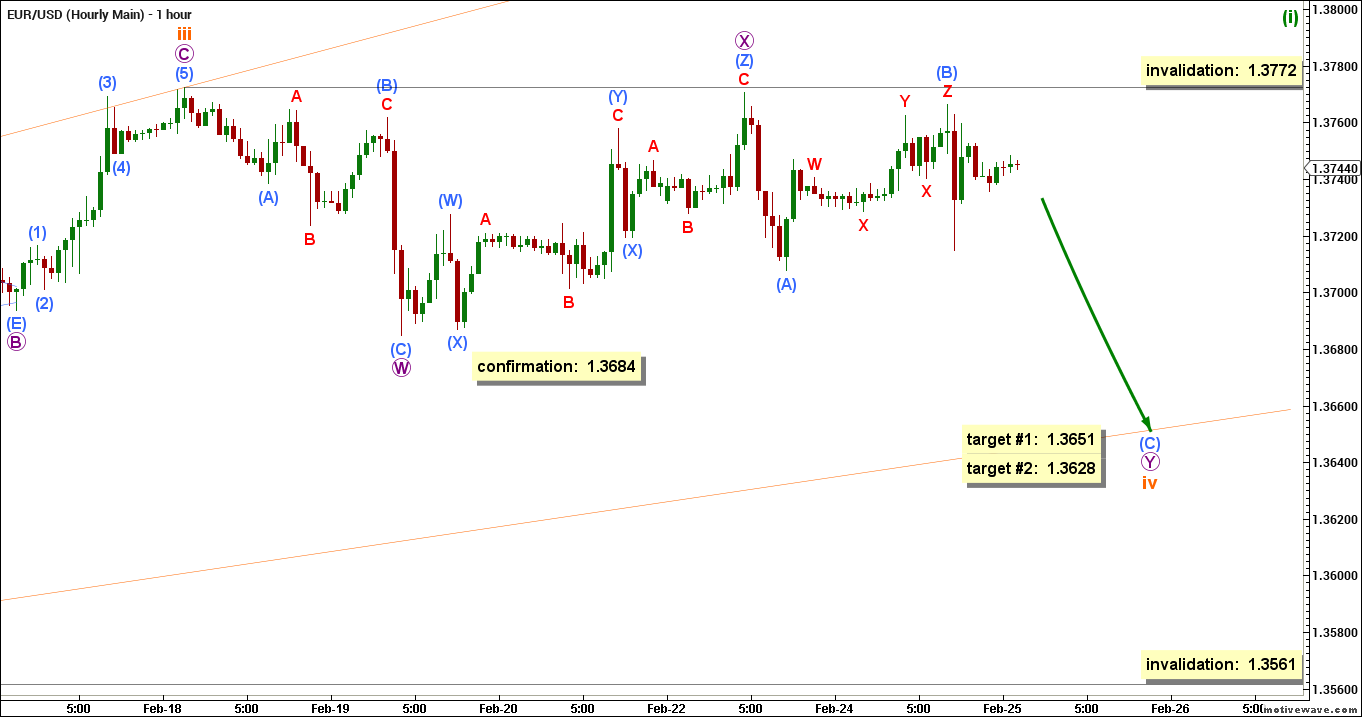 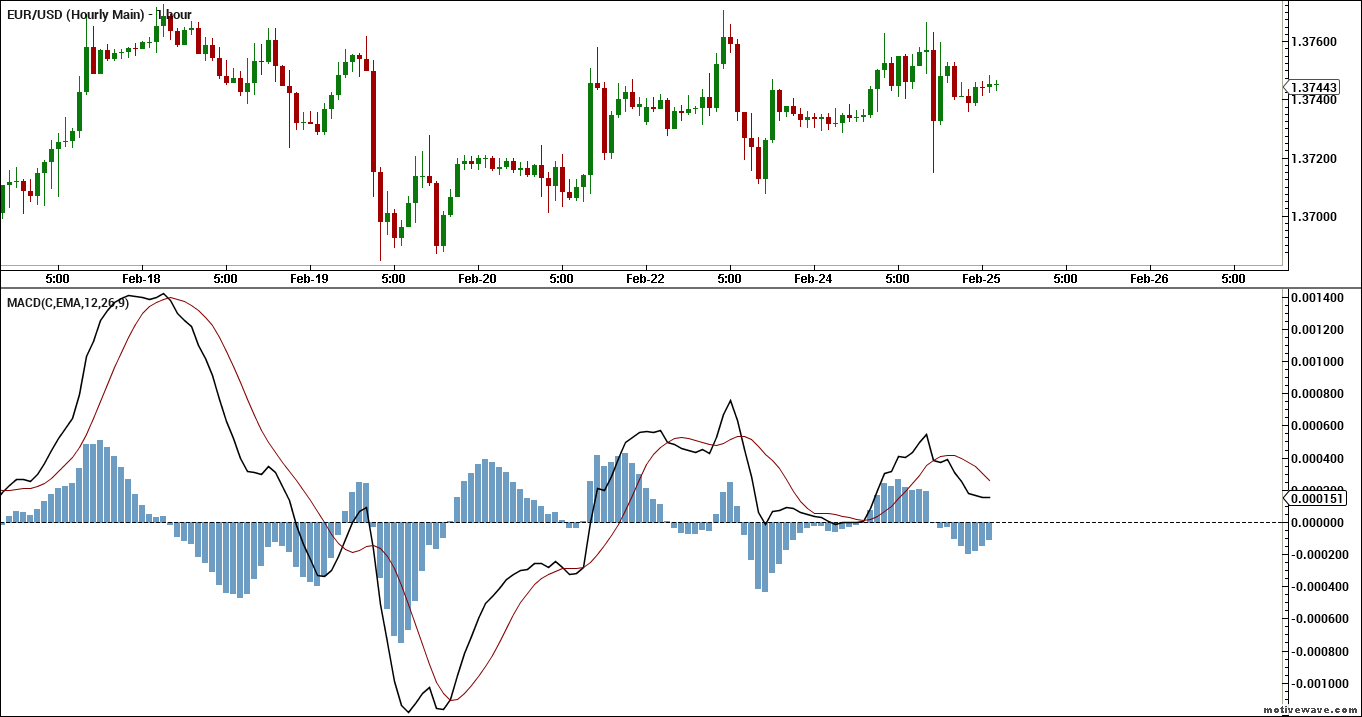 This count sees that minuette wave (i) of minute wave iii is most likely forming an expanding leading diagonal labeled subminuette waves i through v.

Within it, subminuette waves i and iii are complete.

Subminuette wave iv is unfolding towards the downside, possibly as a double zigzag labeled micro waves W, X and Y.

Within micro wave Y, submicro waves (A) and (B) are most likely complete, with submicro wave (B) itself forming a triple combination labeled miniscule waves W through Z.

The MACD indicator is completely unreliable at this point, as momentum indicators usually are in this type of slow and non-directional market environment. 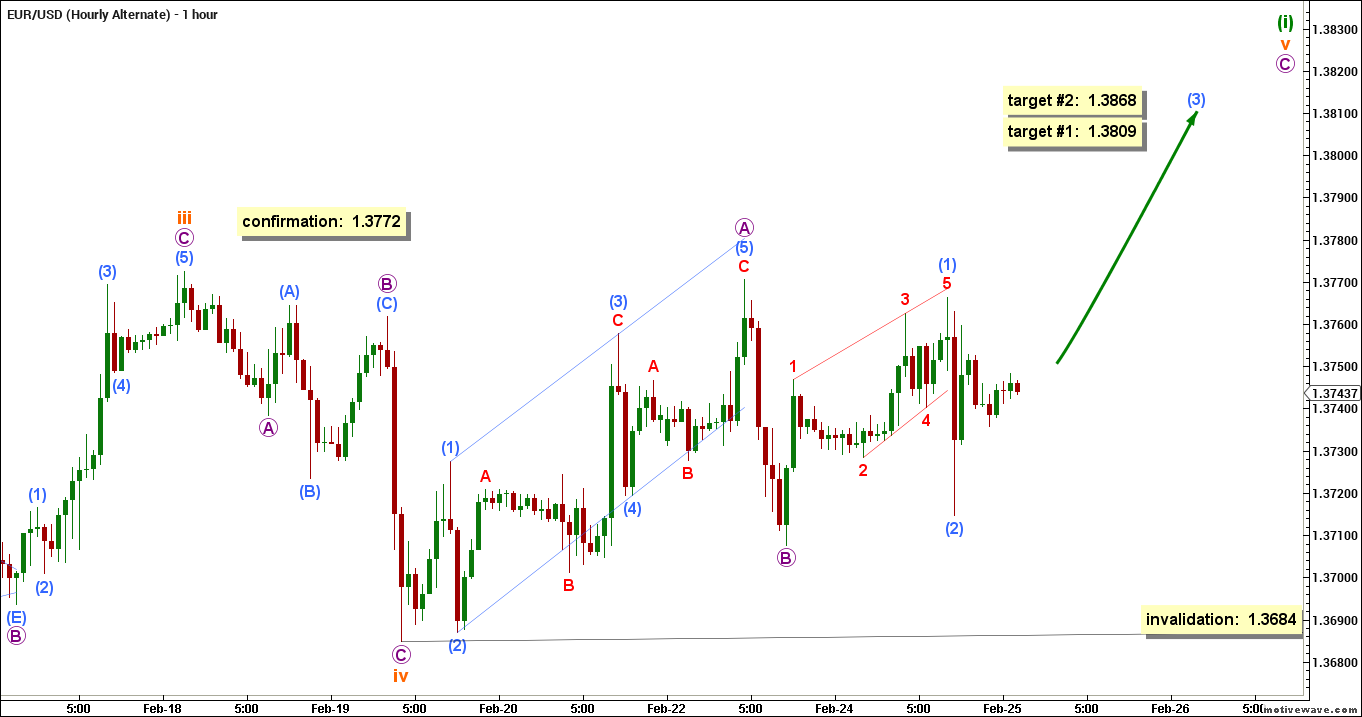 Micro wave A seems to have formed another atypical leading diagonal labeled submicro waves (1) through (5).

Micro wave B may be still unfolding, possibly as a very deep zigzag, or it may complete.

If micro wave B is indeed, then the euro is now moving upwards in micro wave C.

Within it submicro wave (1) is probably formed yet another leading diagonal labeled miniscule waves 1 through 5.

This count expects the euro to continue moving upwards in submicro wave (3). This would be confirmed by movement above 1.3772.

This wave count is invalidated by movement below 1.3684 as within subminuette wave v no wave may move beyond the start of the first wave. 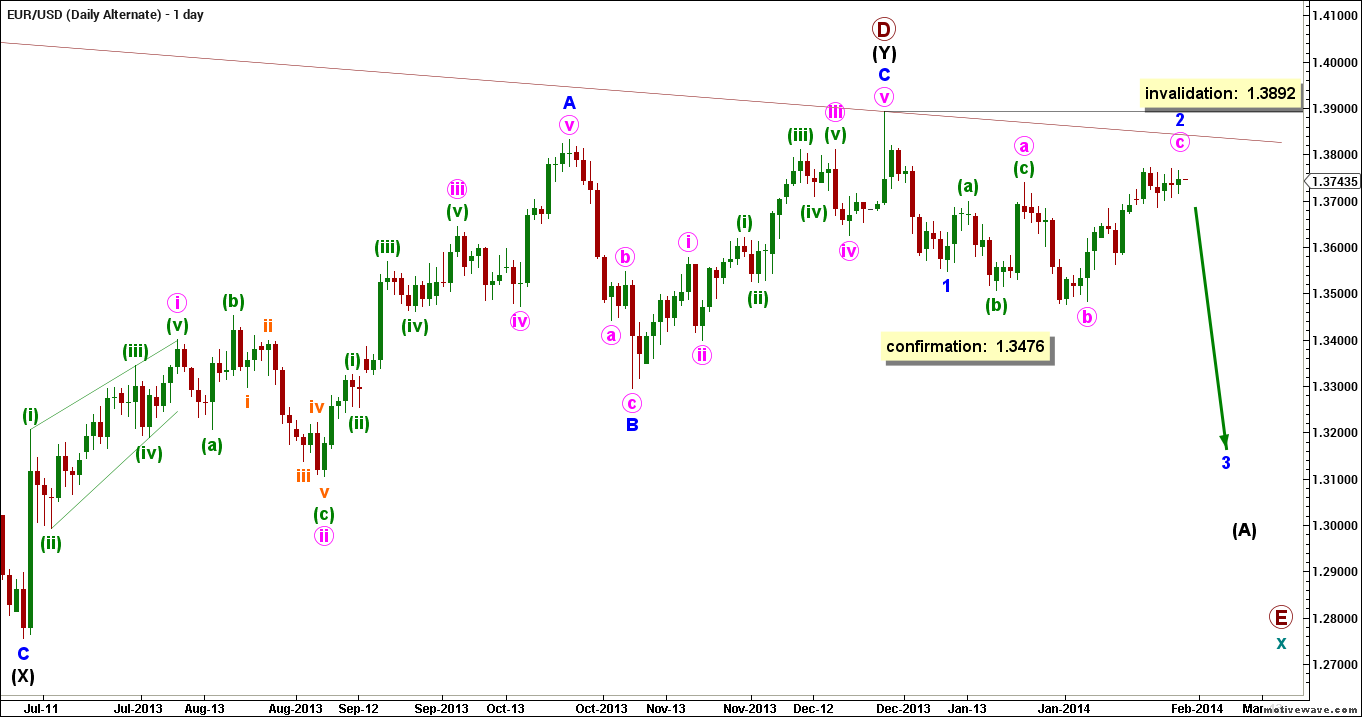 Within it, intermediate wave (A) is forming an impulse labeled minor waves 1 through 5.

Minor wave 2 is forming an expanded flat labeled minute waves a, b and c.

This count expects minor wave 2 to be completed soon, perhaps within a day or two, before the euro turns downwards in minor wave 3. This would be confirmed by movement below 1.3476.

We’ll be able to calculate targets for minor wave 3 once we’ve confirmed that minor wave 2 is complete.

This wave count is invalidated by movement above 1.3892 as minor wave 2 may not move beyond the start of the minor wave 1.