This week the pound moved towards the upside confirming the alternate count and the specified target was reached and exceeded.

The recent upwards movement -so far- was in a three wave structure suggesting that a last leg towards the upside is needed to complete a five wave structure “a motive wave”.

We are updating the main count according to the latest price action and as well adding an alternate count which has lower probabilities as it does not provide the best fit and it expects the pound to unfold towards the downside in a corrective manner.

As always we will wait for either count`s confirmation point to be reached to determine the highly probable count.

Elliott Wave chart analysis for the GBPUSD for 27th December, 2013. Please click on the charts below to enlarge. 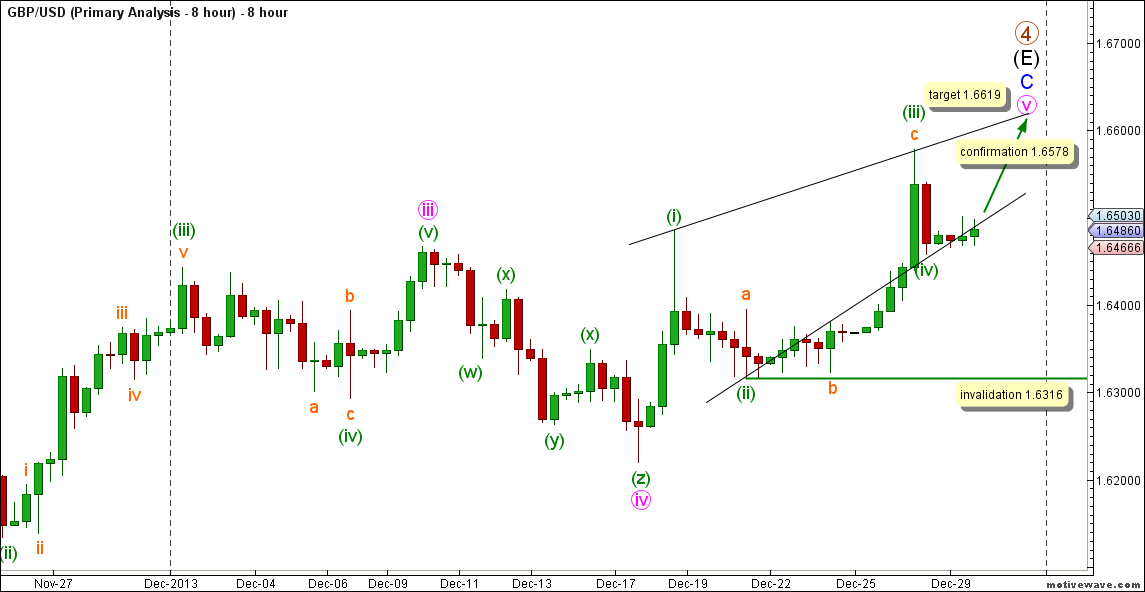 This count expects that wave 4 maroon has more to offer towards the upside and that wave v pink is underway.

Wave (E) black is underway as a zigzag labeled waves A, B and C blue.

Within wave C blue waves i through iv pink are expected complete and wave v pink is underway.

Wave iii pink unfolded as an impulse labeled waves (i) through (v) green and this count expects that wave iv pink is complete as a triple zigzag and that wave v pink is starting to unfold towards the upside.

Wave (iii) green unfolded as a zigzag labeled waves a, b and c orange and it should be noted that wave (iii) green was 3 pips shorter than wave (i) green.

As far as MACD study goes, MACD readings are showing two important points. The first point is that wave (iii) green within wave iii pink registered the highest reading which is typical of a third of a third wave and since that high MACD has kept registering lower highs and thus creating a divergence. The second point is that within wave v pink wave (iii) green was accompanied by a higher MACD reading than wave (i) green and that is expected of a third wave, for this count to be correct a last push towards the upside with decreased momentum is needed to create a divergence signaling the completion of wave v pink.

This count would be confirmed by movement above 1.6578. 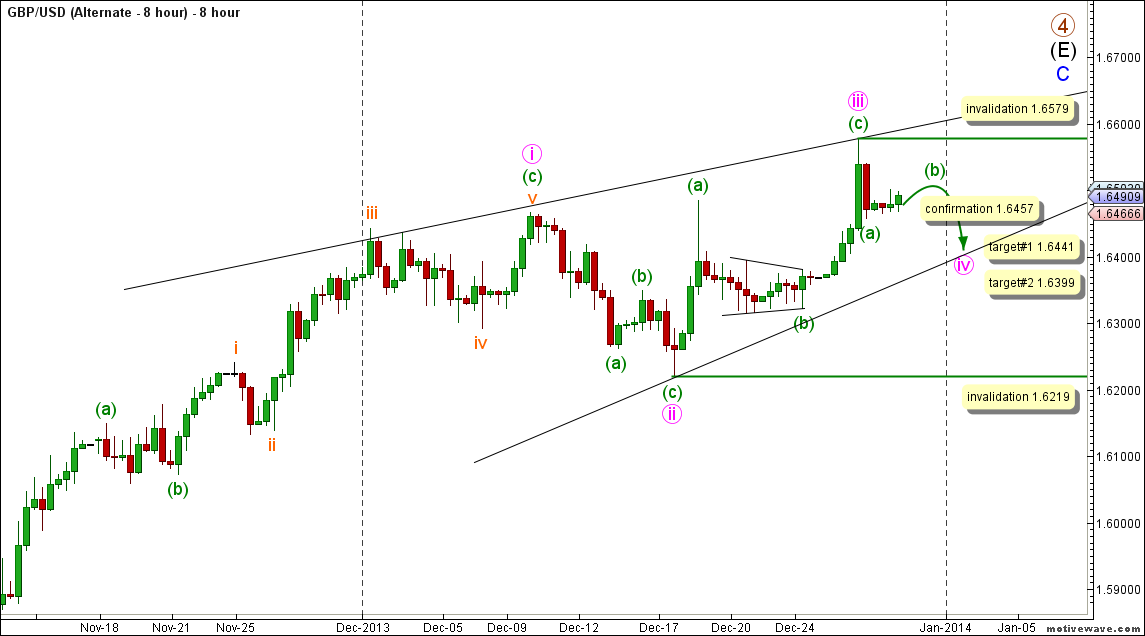 The difference between both main and alternate counts is within the subdivisions of wave C blue.

This count expects wave C blue is unfolding towards the upside as an ending diagonal labeled waves i through v pink with waves i through iii pink complete and wave iv pink is underway.

Wave ii pink unfolded as a zigzag labeled waves (a), (b) and (c) green.

Wave iii pink unfolded as a zigzag labeled waves (a), (b) and (c) green with wave (b) green unfolding as a triangle.

Within wave iv pink wave (a) green is complete and wave (b) green is expected to be underway.

This count would be confirmed by movement below 1.6457.